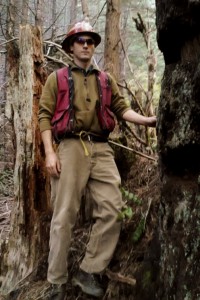 Much admired by his colleagues for his enthusiasm and knowledge, John was a thinker and a doer whose passion for the natural world drove his work in forestry and conservation and his love of adventure and thirst for life.  Learn more about John’s “life well lived”  here.

In memory of John, his family and friends worked with Friends of the North Fork and the Shenandoah Community Foundation to establish a scholarship for young people yearning to learn, explore, and find their own passion for the environment. One scholarship will be awarded annually.

We will continue to build the scholarship fund and welcome your donations.

Tax deductible gifts to the Scholarship can be made directly to the Shenandoah Community Foundation in Woodstock, Virginia.

Give to the Scholarship Fund Today

Support John's memory with a gift to help others explore their spirit of adventure and love for the environment.

John Duncan Wilburn was a longtime kayaker, traveler, mountain climber, and biker. He had a strong passion for the outdoors and was always up for the next adventure. He died at the age of 30, doing what he loved, kayaking in white water on the Upper South Fork of the Smith River in Northern California. He is survived by his wife, Erin Johnson Wilburn, his mother and father, Susie and Herb Wilburn, their families, and countless friends.

Described as “the finest and most true forester of our generation that I have ever met” by one of his colleagues, John was most recently a natural resource conservation officer for the Oregon Department of Forestry. He was known for his kindness, humility and honesty, and being independent and creative, often changing ideas to reality. With family roots in the Appalachian mountain region and formative years spent in southwest Virginia and the Shenandoah Valley, he earned his B.S. in Forestry in 2006 from Virginia Tech. During his school years, he worked in natural resources management at places including Zion National Park in Utah, the US Forest Service Southern Research Station, and the USFS Bonner’s Ferry Ranger District in the Idaho panhandle.

He worked for the Virginia Department of Forestry as an Area Forester before returning to Virginia Tech to pursue more education under a cooperative program between the Department of Forest Resources and Environmental Conservation and the US Navy in which he established continuous forest inventory systems and developed management plans for two naval installations in the Chesapeake Bay region. He also studied habitat dynamics and nesting for eagles. He obtained his Master of Science degree in 2012. He was a Wildland Firefighter (S130/190), and a Virginia Certified Prescribed Burn Manager.