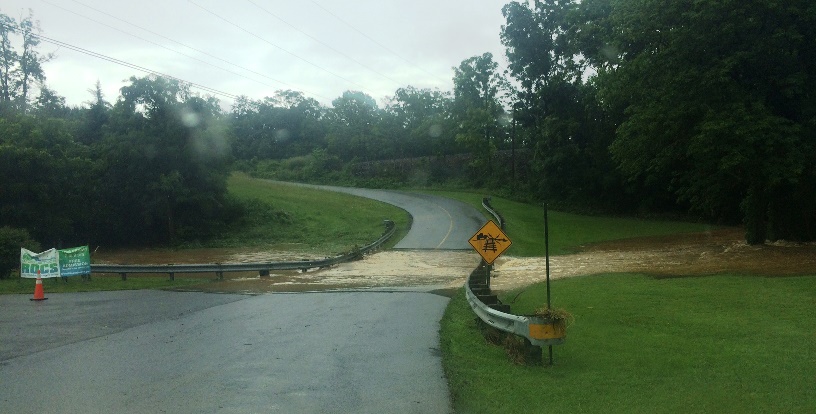 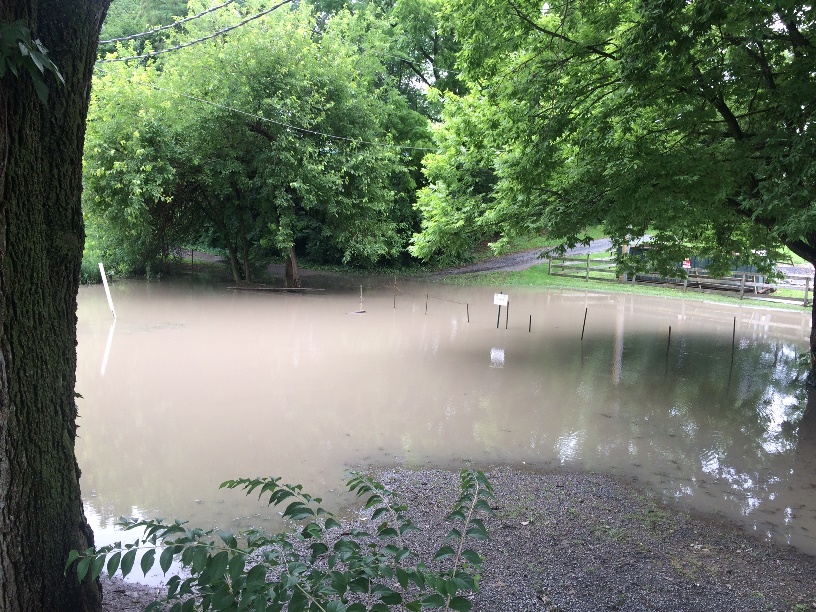 On July 13, 2015, the Town of Woodstock, Virginia experienced a significant downpour that lasted for several hours. In the end, more than 4″ of rain had fallen–more than a month’s worth. The storm overpowered storm drains and caused damaging flooding in several areas including a trailer park near the river and Main Street through the heart of downtown.

This was a deluge of historic proportion, and though it points out the need for improvements, there’s little any community can do that would prepare it to handle such an extreme event.

Stormwater runoff in towns and cities is a constant issue with every rain. It may not cause flooding, but it does cause pollution.

Stormwater is water that originates with precipitation events and includes rain and snow.  Following a rain or snow event, some of the rain or melting snow is captured on leaves, some is captured in small depressions in yards and pavements, some infiltrates into the ground, and the rest  washes across our property, sidewalks, streets and parking lots, taking with it any trash or debris that may be in its path.  The portion of the water that is not captured or infiltrates is generally known as “runoff”.  Runoff may also contain sediment, debris, oil, nutrients and other wastes.

Runoff is generally caused by rain falling (or snow melting) faster than the ability of whatever it’s falling on to absorb it.  Pervious, or permeable surfaces, such as lawns, fields, meadows and forests absorb rainfall and generate little runoff.  These surfaces allow much of the water to be taken up by plants or to soak into the ground where it is naturally filtered by the soil before it replenishes the groundwater and later enters our rivers and streams.  Typically, natural woodlands and fields will generate anywhere from no runoff to about 20% of the rainfall as runoff depending on the soil type. As we develop more and more land, these pervious areas are typically covered with impervious (impermeable) surfaces, such as streets, parking lots and structures. These impervious surfaces generate much more runoff – from 60 to 95% of the rainfall can leave a site as runoff

Why is Stormwater Runoff a Problem?

Stormwater runoff can be a problem because of the increased quantity of water entering our streams and because of contaminants that the runoff may contain. An increase in runoff results in the depletion of our groundwater resources.  Our groundwater resources are used as drinking water and also form the base flow of our streams.  In times of drought, or even reduced rainfall, increased runoff can result in wells having to be deepened to provide adequate drinking water.

Significantly, 80% of the residents of Shenandoah County rely on groundwater for their water supply. Also, as the groundwater level drops, the streams have reduced flow, and can even cease to flow during periods of drought.  When rains come the increased runoff reaches the streams quicker than it did under natural conditions.  This results in a stream with unusually high flows following unusually low flows, which can destroy the physical habitat of the stream and lead to  erosion of the streambed and banks – potentially causing further loss of habitat downstream and loss of property near the stream banks. Stormwater picks up trash, and pollutants such as automobile oil, grease, brake pad dust, excess lawn care fertilizers and pesticides, bacteria from animal waste, soil from construction sites, as well as phosphorus, nitrogen and other airborne pollutants in the atmosphere and carries these into streams and rivers. 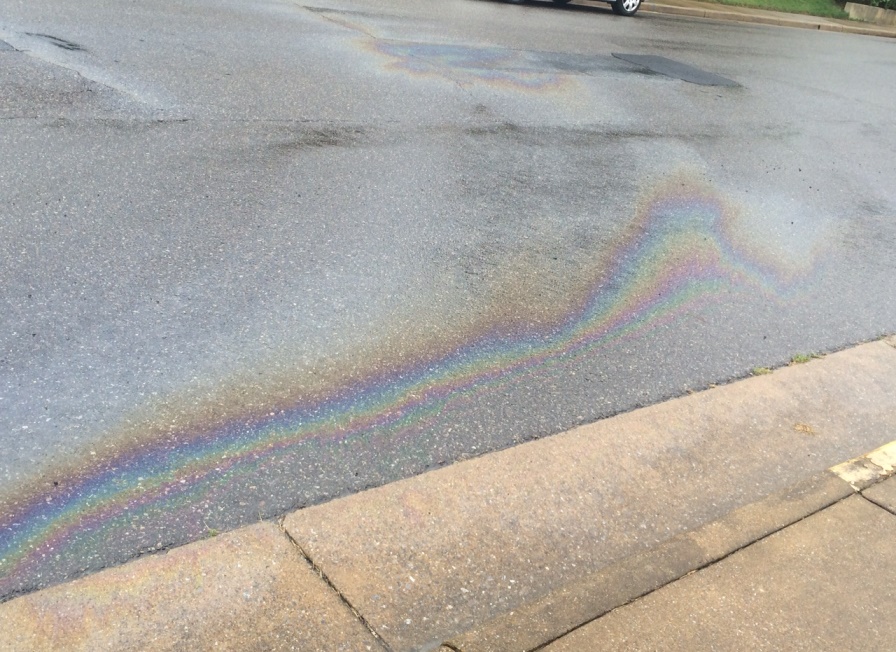 Here in our area, stormwater flows untreated into the North Fork of the Shenandoah River and its tributary streams–into the waters we use for swimming, fishing, and as a source of drinking water. Stormwater runoff can adversely affect plants, fish, other aquatic animals and humans. When sediment clouds the water, it is difficult for aquatic plants to grow and fish eggs and food are smothered. Excess nitrogen and phosphorus from fertilizers can cause algae blooms, which remove oxygen from the water. When the oxygen level in the river and streams is too low, fish cannot survive. Bacteria and other pathogens can wash into the river, affecting swimming and fishing areas.

Trash such as plastic bags and bottles, six-pack rings and cigarette butts are washed into the river and can choke or suffocate fish, turtles, ducks and other birds. Household hazardous wastes, such as cleaning solvents, pesticides, paint, used motor oil and other auto fluids, can poison fish and other aquatic animals. Polluted stormwater can also affect our drinking water supplies, causing human health concerns and increasing water treatment costs. Finally, much of the untreated runoff originates from asphalt-covered roads and parking lots, which become quite hot with respect to natural areas. The runoff from these areas is also heated, and “thermal” pollution can also make the receiving waters unfit for the trout and bass that naturally inhabit our streams.

What Can I Do to Reduce or Prevent Polluted Stormwater Runoff?

Everyone can do something to reduce or eliminate pollution from stormwater runoff.  To reduce runoff, install a rain barrel or rain garden to capture rain water from your roof and direct downspouts away from paved surfaces. Opt for gravel or permeable pavement on your driveway instead of traditional concrete or asphalt.  To improve the quality of the remaining runoff, as homeowners, we should use fertilizers and pesticides sparingly, choosing the least toxic pesticides and following label instructions. Sweep and remove litter from driveways, sidewalks and gutters. Pick up your pet’s waste and vegetate bare areas in your yard.  Have your septic tank pumped and inspected every 3 to 5 years. These and other small actions can make a big difference.

Farmers can get technical and financial assistance to reduce soil erosion and runoff. Eligible practices include planting and maintaining trees and shrubs along rivers and streams, fencing livestock out of waterways and providing alternative water sources, storing and applying manure away from bodies of water and in accordance with a nutrient management plan, and planting winter cover crops. Many of these practices also help improve soil health and keep more rainwater available for crop use.

Virginia recently adopted new stormwater regulations that all counties will be required to  follow. Larger cities, such as Harrisonburg and Winchester, also have further permit requirements. In 2015 Harrisonburg adopted a stormwater utility fee to help build more facilities that can clean polluted runoff before it reaches streams.

Stormwater will now be viewed as a resource instead of a waste. The new regulations will have the most effect on new construction of commercial property, roads, and subdivision developments, but they will also be applied to the construction of single-family houses and other smaller-scale developments.In keeping with the two primary causes of concern with stormwater they will be focused both on protecting the water table by replenishing the groundwater through new engineering technologies as well as protecting water quality by imposing limits to the amount of nutrients that can be transported in runoff from a developed property and discharged to our streams. However individual homeowners can still do their part by adopting practices which limit stormwater runoff from their properties to insure proper infiltration of the water into their lawns, gardens and flower beds and by reducing the amount of pollutants that are potentially generated through over-fertilizing and use of household cleaning products.

Remember, properties have been developed for many years with little or no effective stormwater controls. Only now are we recognizing the serious consequences of our years of poor stormwater management and are taking appropriate steps to prevent those consequences from happening in the future.  So, while the new regulations and requirements will help with future development projects – in effect, we are playing ‘catch-up’ for those years of weak environmental stewardship. That is why efforts by individual homeowners and existing developments also are needed.  Elected officials and voters should support the development, implementation and enforcement of strong local stormwater management ordinances.