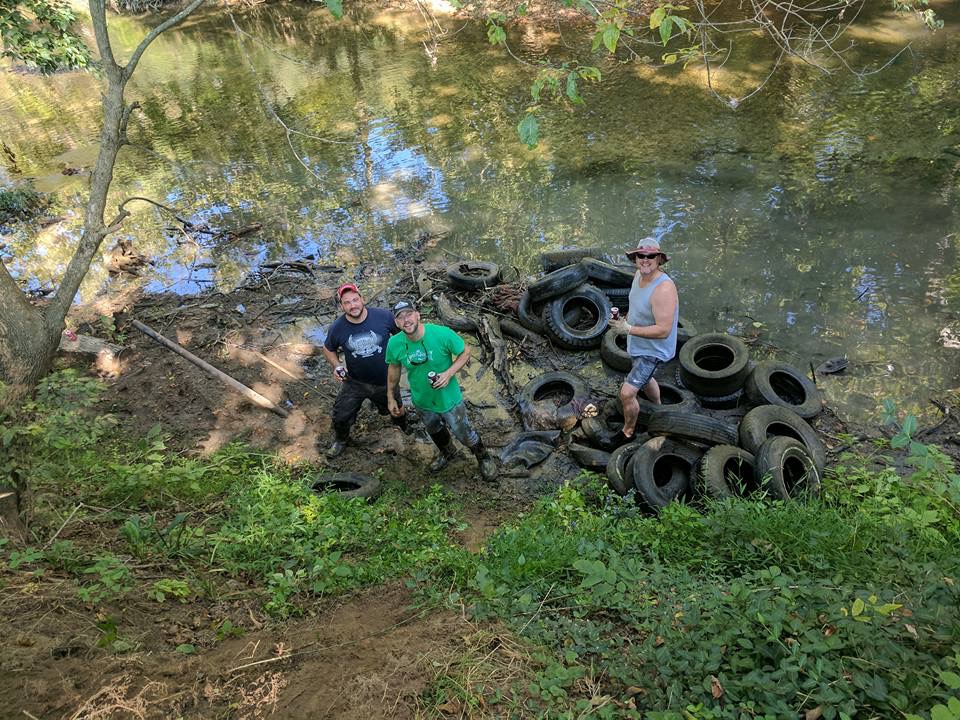 Sometimes, things just fall into place. Thanks to the watchful eye of Alan Lehman with Shenandoah Riverkeeper, we were alerted to a large concentration of tires along a narrow channel upstream of Sandy Hook near Strasburg. “Must be 120 tires,” he said. He had actually tried to count them from his boat.

So we contacted our go-to tire crew at Virginia Eagle Distributing in Winchester–the people who bring you Budweiser and many other fine beverages–and set a date with the landowners to see how many we could pull out of the river.

That morning, Sept. 16th, we were waiting for volunteers at the back of a beautiful hayfield along the river.

You remember that scene at the end of “Field of Dreams” when the long line of cars is snaking its way to the ballpark in the middle of a corn field?  That’s what it felt like when people began arriving.  All at once, car after car pulled in, loaded with volunteers. We had almost thirty folks willing to help. Some were strapping weightlifters, some were enthusiastic lightweights. They ranged in age from 23 to about 73. But they all love the river.

The photos below tell the tale. Before noon we had 163 tires, a new Friends record. Big tires, small tires, old tires, and not so old tires. Many had been there since at least the 1970s and we knew there was no active dumping on the property since that time. Theories abound–is this side channel acting like an eddy in floods, slowing the water and dropping tires from upstream? Is there illegal dumping upstream? It’s hard to be certain, probably both.

What we do know is that when a community comes together it can solve some big problems. Between a willing landowner with a tractor and a volunteer who just happened to have a dump truck nearby, we were able to haul all the tires up the steep banks before lunch and get them to the landfill. No surprise–someone happened to have a big cooler full of cold ones to toast this victory for the river.

Thanks to Shenandoah Riverkeeper, Virginia Eagle Distributing, and the many other Friends volunteers who lent a hand for this big project. Please let us know if you are aware of other problems in the river. We’re feeling stronger all the time!

This Earth Day weekend, Friends of the North Fork is organizing cleanups throughout the watershed…